Something I don’t come across enough online is posts where the author walks through a feature they built along with all the dead-ends and refactors along the way. So this post is my attempt to add to that modest corpus with my most recent coding journey.

Today I merged a Pull request that changes the approach to integration tests in Lazygit and I figured it’s worth doing a writeup of the journey just because it touches on some interesting topics (Go, cyclic imports, interfaces vs structs, and dependencies).

The existing approach to integration tests works like this:

This approach is probably the fastest possible way to write a new test. You typically find an existing test directory (which contains the test definition, recording, and expected repo), duplicate it, then tweak the setup.sh script to do what you want, and then record a session.

Unfortunately, the ease of creation comes at the cost of ease of maintenance:

The new testing pattern would take a different approach: you would define a test entirely in code, using abstractions for setting up the initial repo state, driving the gui, and asserting on the gui’s state. This has a few benefits, for example:

I started by coming up with some interfaces for the components I needed. I wanted the following four things:

And here’s what one of the tests looked like (excuse the length):

(You may have noticed two departures from Go’s idioms in that snippet: the use of a self receiver name and an explicit interface implementation check: both of which I argue for in my Go’ing Insane series).

One Struct vs Many

A couple things bothered me about having each test as its own type though:

Given these concerns, I switched to having a single struct where the old methods were now passed in as arguments to its constructor:

The constructor handles missing args by using defaults, and complains at runtime if the required args are missing (If you want an idea for a Go linter, make one which allows you to define mandatory struct fields via comments: wouldn’t take long to write and you’d get lots of street cred).

Initially the Input and Assert interfaces were implemented in the gui package (where most of the action in lazygit happens). I quickly found that it was a pain in the ass to maintain these, as there are many things you may want to input, and many things you may want to assert. Every new method I added meant updating the implementation struct in the gui package as well as the interface back in the integration package. Interfaces work best when they are stable, and if you find yourself with an interface that has only one implementation, where you’re frequently adding new methods, you may have picked the wrong abstraction.

InputImpl, my input implementation¹, had a pressKey method which actually made use of gui-specific code, but I had all these other convenience methods that were just building on top of that method without needing access to any internals. For example:

So I extracted out a new abstraction: GuiDriver, which so far has proven far more stable:

And now I’ve got my Input struct living in the integration package, taking GuiDriver as a dependency. Same deal with Assert. I’ve ditched the interfaces again because I figured I didn’t need the overhead of an unstable interface that would only be used within the one package. The GuiDriver interface is defined in the integration package and the implementation is in the gui package. Now my gui package depends only on the following interface for my tests:

And I’ve scrapped the original IntegrationTest interface because I wasn’t using it for anything (and it wasn’t necessary for unit tests). It’s also worth noting that my IntegrationTest struct implements the above interface and in the Run method it takes the gui adapter and instantiates the Input and Assert structs with it to pass onto the inner Run function: further lending credence to the idea of having a single test struct rather than many.

In the original testing approach, when invoking lazygit in test mode we would pass it a LAZYGIT_RECORDING_PATH environment variable which would tell lazygit where to find the recording JSON to replay. In the new approach we instead need to pass the name of a test for lazygit to load, which it does by iterating through all the tests until it finds a match. This introduces a new problem: if lazygit depends on our tests, and our tests depend on lazygit, then we have a cyclic dependency between packages. Go disallows this (with an error message that could be a little more detailed in my opinion) and with good reason: cyclic dependencies cause all kinds of problems. One particular problem in our case is that we don’t want to be shipping a binary with a bunch of test code baked in, which is what happens when you have your code depend on your tests.

To resolve this I used some good old-fashioned dependency injection so that the entrypoint of my code³ actually receives an integration test interface as an argument (which may be nil if we’re just running lazygit normally). Unfortunately, when you want to exercise dependency injection at the level of a program², you either need to resort to conditional compilation, or just have a separate main.go which you invoke when running an integration test, which itself has the dependency on the tests. I went with the latter.

Notice that I’m importing both an integrationTests package and an integrationTypes package. The reason for splitting those is so that the rest of the lazygit code can depend on the IntegrationTest and GuiDriver interfaces without actually needing to depend on all the other integration test code. It’s only in this injector file that isn’t part of the final lazygit binary where we depend on the actual tests.

Here’s how the package is arranged now: 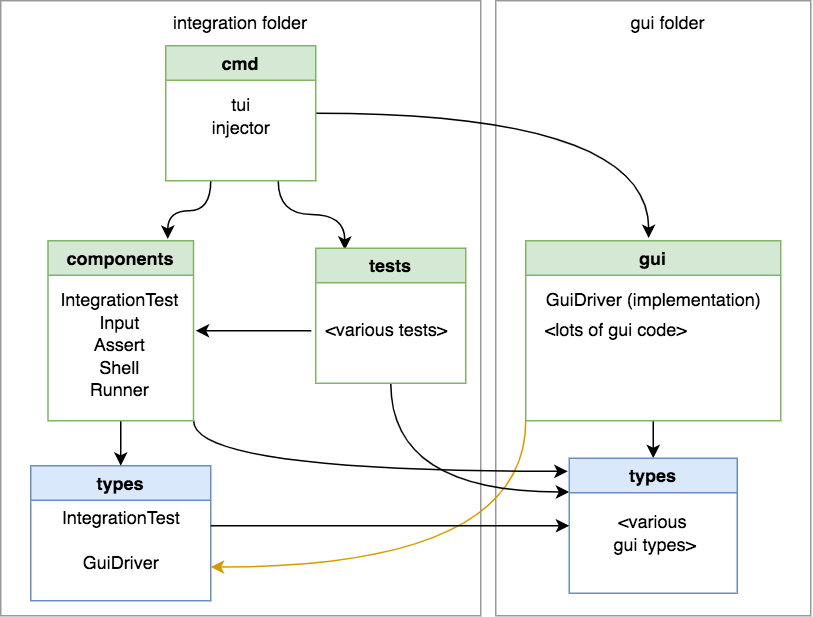 That yellow arrow bothers me because I feel that all arrows from one folder to the next should go in the same direction (even though Go is satisfied because there’s no cycles among the packages themselves). There are a few things I could do: 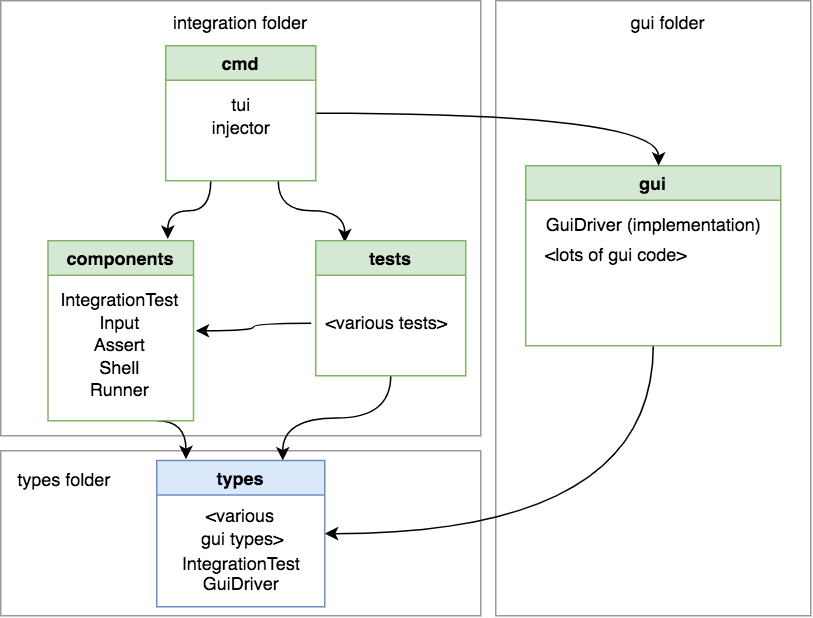 This would be simple enough, but it would woefully reduce the cohesion of the codebase: for any given package that would otherwise define its own types package you need to go and look it up in the far-away top-level types package. I’m willing to be persuaded that this is actually a good pattern but I’m not yet convinced. 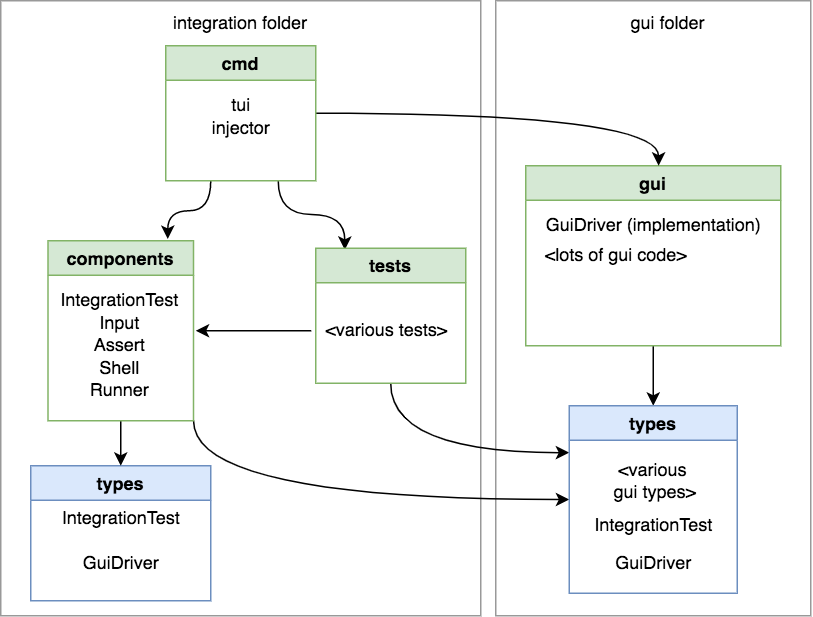 Given that interfaces can be implicitly implemented, Go happily allows you to duplicate them. The integration package has its definition and the gui package has its definition and if they get out of sync we’ll get a compile error. The problem with this is that I actually prefer to explicitly implement interfaces both for the sake of documentation/discoverability, and so that when the interface isn’t implemented I get an error situated in the actual struct definition rather than a random call site. There’s also the fact that you can’t easily substitute a slice of one interface type with another.

I also don’t like the idea of having to change two places every time I want to change the interface. 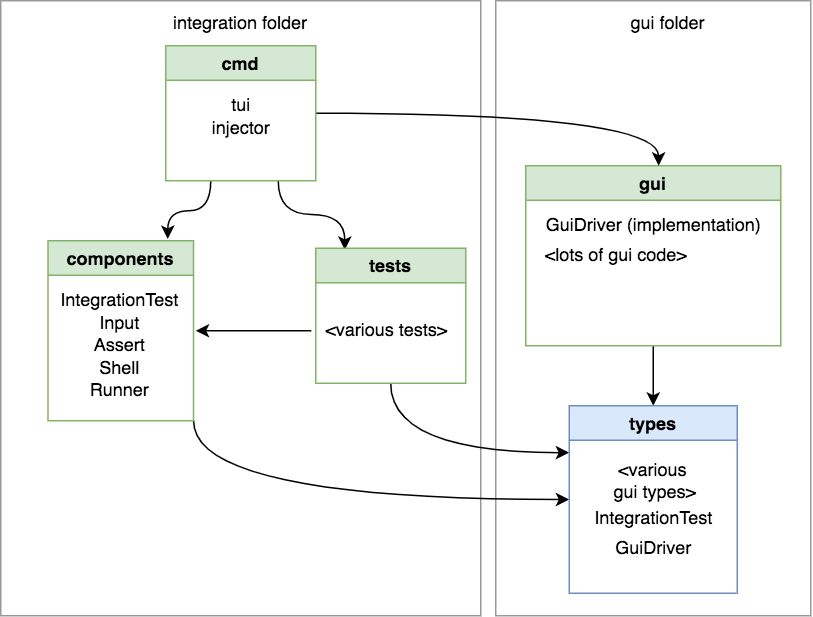 Or is it the other way around? Is the gui package the one saying ‘I will allow any integration test framework to pass me a test so long as it conforms to my test interface that itself takes my GuiDriver interface.

One thing is for sure, the only reason we would ever change the GuiDriver interface is for the sake of writing tests, which has me leaning towards keeping the types in the integration folder. But I’m conflicted.

I almost didn’t bother to do this, but I thought I may as well add some unit tests for my integration tests to ensure they don’t always give false positives. Here’s an example:

Keeping GuiDriver as its own interface, rather than just directly depending on the gui implementation, proved useful in this case for the sake of testing.

At any rate, thanks for reading! If this post has piqued your interest in Lazygit, consider becoming a contributor, sponsoring me, or starring the repo. If you were shaking your head in disagreement while reading this whole thing, let me know what could be done better. Till next time!

¹Much ink has been spilled on Input vs IInput vs InputImpl and different ways to differentiate your abstractions from your concretions. The stack overflow conversation typically goes like this:

OP: Should I call my interface ICar and my struct Car? What’s the idiomatic approach here?

Alice: The interface should be Car and the concretion should be FastCar or SmallCar or whatever specific thing you’re dealing with. If you only have one implementation then why have the interface in the first place? This is a code smell and suggests you need to refactor.

OP: Because I need to unit test my code and that means having an interface which I can mock.

Alice: That’s stupid, there are various mocking frameworks available these days for mocking concretions without having to litter your code with interfaces

Dave: Those mocking frameworks typically use conditional compilation which has its own problems, and can lead to people mocking random structs with reckless abandon, leading to tests that are brittle and hopeless at catching real problems.

Bob: But interfaces aren’t just for unit testing, they’re for describing the contract between modules, and sometimes you only have one consumer of your module

Clyde: And if you’re following TDD, you start at the top level with the contract and then work your way down. Interfaces are there for defining the contract

Dave: In C# we’ve got the ‘I’ prefix everywhere to disambiguate interfaces from concretions and nobody complains

OP: THIS DOESN’T ANSWERED MY QUESTION!

Funnily, the ‘code smell’ argument actually did apply to my InputImpl struct because it indeed did not belong in the gui package and in the end I had no need for the interface, but the abstraction which took its place, the GuiDriver, ended up with the exact same problem! At the moment I’ve got both the interface and concretion named GuiDriver (which I can do because they’re defined in different packages) and I’m not really happy with the outcome. This really deserves a blog post in itself. Reader, please give me your take on this whole fiasco so I can better understand.

²You might be wondering: why are we running the lazygit binary from an integration test in the first place? Why not just run the code directly? There are a few reasons: